Read the latest on Orthodontics, Invisalign and Pediatric Dentistry!

When it comes to keeping your floors from being covered in sticky fluids, the sippy cup is a great invention! But when it comes to protecting your children’s developing teeth, the sippy cup carries a dark side. A sippy cup usually means your child is wandering around all day drinking sugary drinks and keeping any new and emerging teeth coated in sugar. Over time, that sugar builds up and will cause cavities and tooth decay.

That’s why it’s best to give up on the sippy cup as soon as you can. The earlier you start, the easier it will be. Without having to wade into a power struggle, here are a few techniques you can employ to move your children to a new milestone and embrace a big-kid cup.

Kids always want to copy their parents. One of the best ways to encourage using a big-kid cup is to make a big deal out of using a cup yourself. Show them how much fun it is to use a big cup, and then let them try.

Keep a firm grasp on the cup yourself, and show your child how to drink from a regular cup. A few more encouragements of, “Aren’t you a big kid now!” and the sippy cup will be a thing of the past.

Build Investment in the Cup

As adults, we often forget how important it was when we owned a thing that was ours as a kid. It didn’t matter if it was a toothbrush, a belt, or a cup. If it was ours, we wanted to use it. Leverage this urge with your kids when it comes to ditching the sippy cup.

Take your kid to the store to pick out his or her own cup. Find a place that sells cups with their favourite characters on it, and suddenly this cup becomes the greatest thing in the world. Your child will want to use it exclusively, and you can quietly make the sippy cups disappear. Unless...

Make It a Milestone

—Unless you want to make the act of throwing out the sippy cup a symbolic gesture of growing up, in which case, enlist your child’s help with this milestone. Kids love to feel like they’re growing up. Any act that brings them closer to this state is desired.

Tell your kids they are big kids now, and ask them to throw out their sippy cups. If you’ve partnered this with purchasing a “big-kid-cup” then why not have a celebratory big kid swig from his or her new favourite cup?

Learn to Love the Mess

Guess what? Kids are messy (but you knew that). Switching a toddler from a sippy cup to an open cup is going to be a process, no matter how easy it may go. It will take time, and it will come with messes. Learn to relax about these messes and accept they are a part of your child growing up.

Of course, there are ways to minimize or control these messes to make cleaning up easier on you. Try limiting cup drinking to certain parts of the house, like the kitchen or the playroom. Put down some towels under a highchair, or make drinking time shirtless time—whatever helps you stress less about the mess.

Using a sippy cup isn’t a bad thing, but because it can encourage harm to developing teeth, it’s a good idea to move from the sippy cup to a regular, open cup as soon as possible. Make it a milestone for your kid, a part of dental care, and the sippy cup will be given up and forgotten in no time. 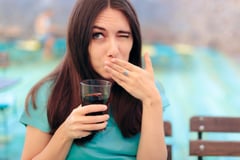 Please fill in the form below to subscribe to our blog